On Saturday night we said fair well to our wonderful clinic manager Jenny at her retirement do.

Jenny has been at the Newport clinic for 10 years. During her time at the clinic she has seen and implemented many changes, made many friends and created some fantastic memories!

Jenny started her time at the clinic in 2008 after a long careea in HR. At this time the clinic in Newport we known as GCC Chiropractic Centre and was under the ownership of Ben and Alyson Bacon. Jennys first job was to overhaul the clinics proceedures and organise the clinics overflowing mounts of paperwork.

In 2005 The GCC clinic was taken over by Michelle and encorporated into the Axis Chiropractic group. Jennys help and support was paramount during this turbulant transition.  We have been through so many trails and tribulations during those first few years, some very stressful but some absolutly histerical!!

My favourite such memory is her almost getting locked in the clinic one night!  While sat at home around 10.30pm I received a phone call from Gwent Police requesting someone go and liberate her! Some local children had spotted her hanging out of a top floor window waving a blue patient gown like a crazy woman! They promptly called the police and notified them the cleaner was stuck in the window.

Thank you for the memories Jen, you will be missed by everyone at the clinic. Good luck for the future 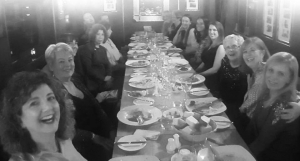 About the Author: Axis Chiropractic